Is the magic still happening at Disney World, even during a pandemic? Read about my experience going to Disney’s Hollywood Studios and the Magic Kingdom during COVID. 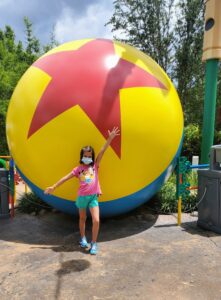 I love Disney World. It’s one of my favorite places to go. I’m 44 years old, and I’m unashamed to say I never get tired of going to a Disney park. My husband thinks I’m weird for loving Disney so much, but I thoroughly enjoy myself every time I go. I love the theming, the characters, the attractions, and best of all, the Cast Members who work so hard to give personalized attention and exceptional service to all guests.

Disney World opened its doors to guests on July 11, 2020, and I waited a few weeks after the parks had opened to return. I took my youngest daughter, Nadia, and I also went with my colleague, Dottie, and her daughter, Amber.

Hollywood Studios opened at 10:00 a.m., and we arrived in the parks around 9:30 a.m. so we could try for a Star Wars: Rise of the Resistance boarding pass. Disney distributes boarding passes at 10:00 a.m. and 2:00 p.m., and they are challenging to get because of limited availability. There must not be very many boarding passes distributed because we were on the app, poised and ready at 10:00:00, but all boarding groups disappeared within SECONDS! How are there so many people more technologically savvy than we were? Disney Cast Members told us to think of Rise of the Resistance Boarding passes as a “lottery,” which helped me feel a little better, but I still didn’t have a boarding pass. 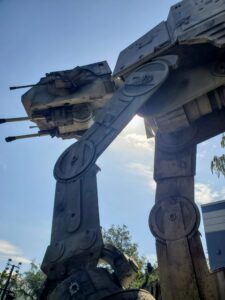 We got over our disappointment pretty quickly as we checked the Disney World app and saw Millennium Falcon, Smugglers Run was only a 10-minute wait. Because of social distancing, the line looked longer than it was. In actuality, it was a walk-on. Yes, it took about seven minutes to get seated on the ride, but it took that long to walk through the queue without stopping.

Pro Tip: Get to the parks early and try to ride one of the headliner attractions first. The most popular rides will get crowded after the park has been open for about an hour, so make every effort to get one big ride in at the beginning.

After leaving Star Wars Galaxy’s Edge, we headed into the adjacent Toy Story Land and rode Toy Story Midway Mania, one of my favorite attractions. The posted wait time was 20 minutes, but it was a walk-on as well.

Slinky Dog Dash was the longest wait time at about 50 minutes, but it was worth it!

The newest attraction at Hollywood Studios is Mickey and Minnie’s Runaway Railway. It opened March 11, 2020, right before COVID. Nadia and I rode it when we visited Disney World on March 12, so we knew just enough to be excited for the ride this time around. There was no pre-show cartoon, but the ride is just as delightful. 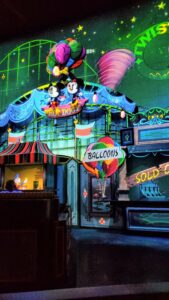 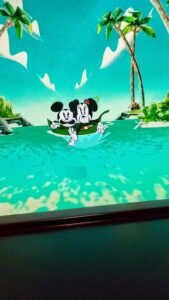 Cooling Off at Oga’s Cantina

One of the highlights of our day was getting a drink at Oga’s Cantina mid-afternoon.

You have to have a reservation (and those are pretty tough to snag during COVID), but it was worth the wait. We ordered the Jabba Juice, a non-alcoholic drink: Simply® Orange with Pineapple, Kiwi, Cantaloupe, and Blueberry Popping Pearls. It was $6.50, and it may have been the best mock tail I’ve ever tasted.

If you can get a reservation at Oga’s Cantina, give it a try! The drinks were tasty, and the atmosphere really made you feel like you were in Empire Strikes Back. 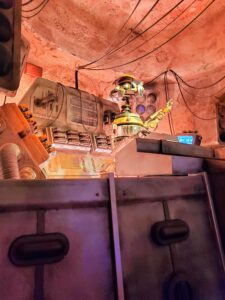 How Crowded Was Hollywood Studios?

Hollywood Studios was crowded from the moment the park opened. I do not have any information about how many people were at the park that day, but it felt cramped and it was a Tuesday. Interestingly, my friend Mary visited the parks on a previous Saturday and she said Hollywood Studios didn’t have large crowds.

Of all the parks, Hollywood Studios will feel most crowded during COVID for a few reasons:

There are no nighttime shows or fireworks at the parks, but we stayed until the park closed at 8:00 p.m. While we were there, each park was open for 10 hours per day, but as of September 8, Disney is reducing park hours.

In my opinion, ten hours was plenty of time at the parks because we were exhausted at the end of the day. I never like to leave a park early, so being forced to leave at 8:00 p.m. meant we all got plenty of sleep and were ready to GO the next day!

Pro Tip: If you have shopping to do, you can actually wait until the park closes because many shops stay open up to one hour after park closing. Once I learned this fact, I stopped shopping during park hours because it meant I could ride all the attractions during park hours and shop when the parks were closing.

There’s nothing like the Magic Kingdom, even during a pandemic. I love getting to the park early, wishing the Cast Members a good morning, and walking straight to Peter Pan’s Flight.

The Magic Kingdom has 46 attractions to spread out the crowds, and most attractions were less than a 15-minute wait. During the first hour, we rode Peter Pan, Seven Dwarfs Mine Train, The Many Adventures of Winnie the Pooh, Space Mountain and Pirates of the Caribbean. Not a bad first hour, eh? 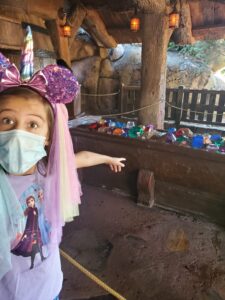 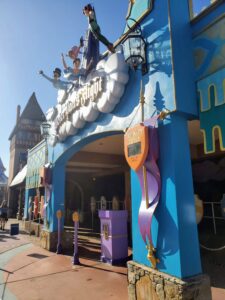 One of my main goals in coming to the Magic Kingdom was to say goodbye to one of the original attractions, Splash Mountain. Disney is re-imagining Splash Mountain at Disney World and Disneyland to a Princess and the Frog theme to “continue to deliver stories that are relevant and inclusive.” 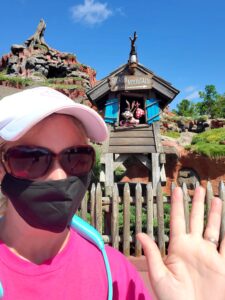 Some people are distraught with the idea of changing Splash Mountain because it’s one of the original attractions at both parks. I, for one, think we need to put nostalgia aside. Song of the South has not been available since 2001 for “outdated cultural depictions,” and I find it surprising that Disney had not re-themed the ride years ago. Walt Disney was a man who embraced progress and change. One of his most famous quotes was, “Disneyland will never be completed. It will continue to grow as long as there is imagination left in the world.” I say, let’s see what Disney Imagineers can create! The ride will still use the original track as far as I know, so there will always be a piece of the original ride in the reimagined attraction. 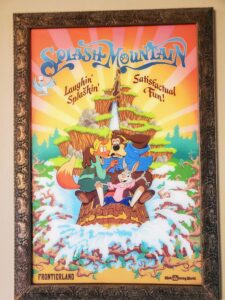 At the end of the day, we had ridden every attraction at least once. There were a few rides that weren’t open like the Tomorrowland Transit Authority People Mover (one of my favorite rides to put my feet up and relax), but we checked off just about everything.

Where are All the Characters?

Disney parks are magical to me for three reasons: entertaining rides for the whole family, multiple opportunities to interact with characters, and personalized service from Cast Members. I see these three elements in percentages, and I value them as follows:

During COVID, the attractions were not really affected very much. Space Mountain and Slinky Dog Dash are just as much fun as they always are, except for the fact that many of the pre-shows were omitted (like Tower of Terror and Haunted Mansion). Disney is making every attempt to create physical distance between parties, and pre-shows often involve putting masses of people in an enclosed area. My experience with the rides were fantastic. There are short wait times and the rides are just as enjoyable.

I really missed the character interaction. All the character meet and greets at Town Hall, Princess Fairytale Hall, the pavilions at EPCOT and Star Wars Launch Bay are closed. At the Magic Kingdom, I saw a total of ONE character. Tinkerbell made her way around the castle hub and down Main Street on a motorized treasure chest in, what Disney refers to as, a Character Cavalcade.

At Hollywood Studios, we saw a Disney Junior Cavalcade with Vampirina, Fancy Nancy and Doc McStuffins. 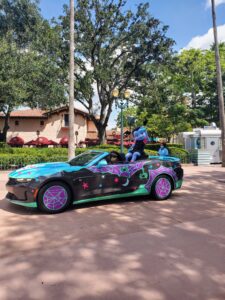 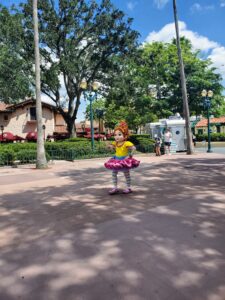 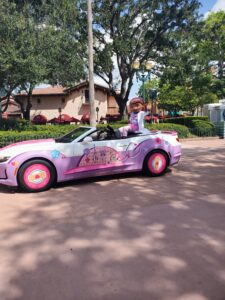 There are several opportunities to see Character Cavalcades throughout the day if you time it right. However, if you were like us and you are riding attractions, you will not see the cavalcades unless you happen to pass by at the right time.

Conversing with Cast Members is also not the same. In the past, Cast Members would make a point to come up and speak to guests, trade pins and sometimes even have a moment of unscripted Disney magic. Now, with physical distancing and mask requirements, Cast Members must remain at a distance and there are fewer opportunities to talk with them. While all the Cast Members we saw were pleasant, their primary goal was to keep us distanced instead of interacting with us. I missed that. And yes, it impacted my experience.

I’m also a huge fan of the parades, fireworks and nighttime shows. Because those events draw crowds, Disney has canceled them until further notice. I did watch a Disney Food Blog YouTube video today that talked about EPCOT’s new nighttime spectacular called HarmoniUS. According to the video, Disney is continuing to work on the barges that will hold the fireworks, so hopefully we will have a debut date for the show very soon.

Should You Go to Disney World?

So, as Nacho Libre says, “Let’s get down to the nitty gritty.” Does Disney World still have magic and is it worth it to go now?

I think it depends on what you want. If you want to do lots of rides and enjoy short wait times (except for Hollywood Studios which will be hit or miss), then go. NOW. Even if you can’t go before September 8 when the park hours shorten, you will still have plenty of time to ride the attractions you want to enjoy. For me, the attractions are 40% of my enjoyment, so I felt like 60% of my Disney magic was not present. But maybe attractions are 80% of your Disney fun so I’d say, “Go for it!”

If you are in one of these categories, I’d suggest waiting to go to a Disney park:

In all, we had a blast at Disney World because I changed my focus. Yes, characters and Cast Members comprise 60% of what I find to be magical at Disney World, but I knew this trip would be unique. I set my expectations that we were there to enjoy the rides, and we did almost everything we wanted to do.

I also felt very safe at Disney World. The buses set up partitions and a numbering system for the buses to keep parties together but separated from other parties.

Hand sanitizer stations were located throughout the park and before and after most attractions.

Cast Members and guests all wore masks, and I did not see guests trying to take them off.

What do you think? Will you schedule a Disney trip during COVID when crowds are low but there are fewer offerings? What ride, restaurant or resort do you want to try while you are there? Let me know your thoughts in the comments below. 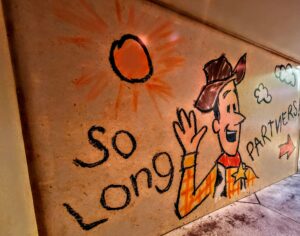 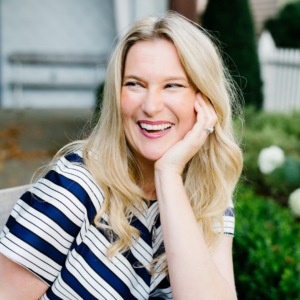